skip to main | skip to sidebar

My house was damaged in the "cyclone" that went through the northern suburbs of Brisbane in November last year. It has taken 9 months to get repairs started, I will be un-RACQ-ing as soon as they have paid out the rest of the claim. A stressful event from beginning to soon-to-be end. 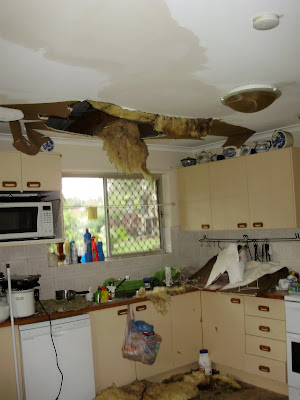 (The light fiting is still full of dirty water in this pic - there was a lot of water in the house.)


So this is what I have lived with for the last 9 months - a 2 metre hole in the ceiling over the kitchen. As the storm was coming over, I had looked out the window at the green sky and said that I was glad we had the big gum trees taken out of our back yard. Unfortunately, the back neighbours still have their trees, and all the branches hit our house. Broken tiles, leaking roof, wet insulation, leaking light fittings = collapsed ceiling. There was some other damage to the house and fences, but this is the most obvious. I have taken to calling it the bogan skylight - the plasterers liked the name. 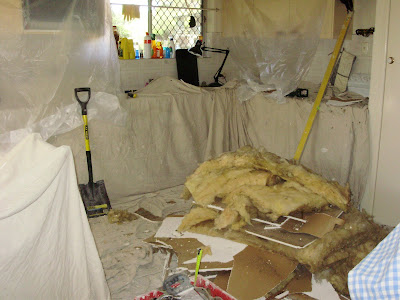 Yesterday the plasterers finally arrived and did this to my kitchen. I think they tried to clean up afterwards, but I still have to vacuum the top of the cupboards. I haven't looked, but I am sure they are covered with the same crap that fell every where else. Think I'll wait till the cornices are done on Thursday. Still need the electrician and painter to finish things off and then I can start painting walls. (they weren't damaged, I just want to freshen things up) 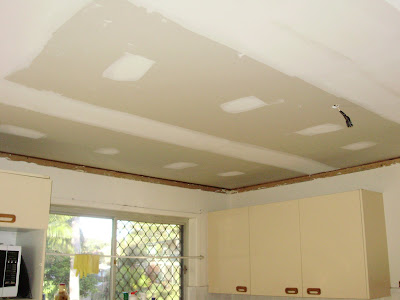 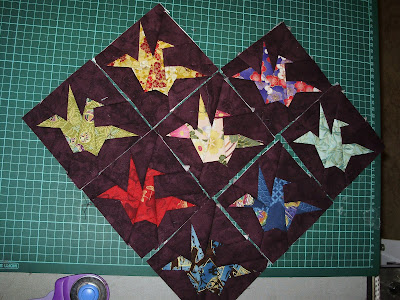 Started the Peace quilt. I am foundation piecing on interfacing for this one. I like foundation piecing, but the picking out of paper afterwards is really tedious. Using interfacing means that I have to trace out each block by hand, but I think I prefer that to the paper removal. I did think that I would hand piece the blocks, because they are a bit fiddly. I've started doing them on the machine now though, still fiddly but I've got the hang of it now. Have to make 98 total. 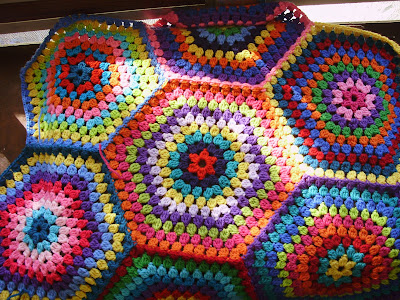 Still going with the crochet hexagons - they are pretty quick to make up, and I am crocheting them together as I go.

I kind of take for granted that I know how to crochet, and knit, and sew. It's not until I encounter some one who is learning to do something new that I realise how much I take these skills for granted. I remember learning to crochet when I was about 10, and how completely bamboozled I was by number of loops over the hook to do a treble and why didn't the numbers work out - three loops minus 2 equals 1 left on the hook, right? Wrong! It equals 2 (I'd forgotten the one that you pull through). It was a light bulb moment for me, and once that was worked out I was fine. I didn't really make anything as a child, but I spent a lot of time fiddling with bits of wool and stuff. And it seems to be like riding a bike - I haven't crocheted anything for years, but I could just do it, it must be retained in your brain somewhere. 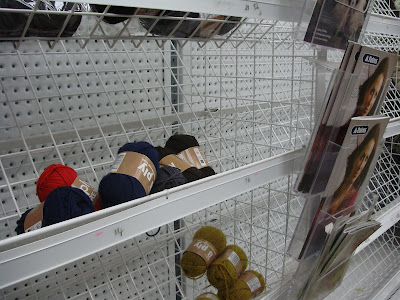 The shelves at Spotlight remain completely bare of 8 ply wool. It's been like this for weeks and weeks. There really isn't anywhere else on the Northside of Brisbane to buy supplies - Big W has a limited (very limited) range - I couldn't find anything to buy there, even though all the wool was on sale, there was no plain 8 ply plain colours in 100% wool. Things were looking so bad at Spotlight that I was seriously considering buying acrylic. Alas, this was also only available in crappy colours, so I talked myself out of it. Acrylic stuff has it's place, but I don't think it wears as nicely as wool, plus it usually feels like steel wool as well. 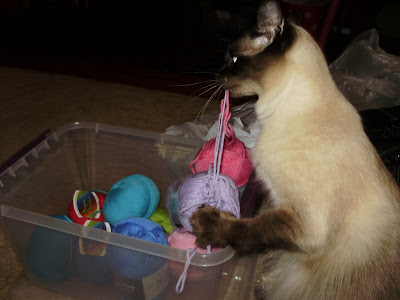 Might have to rethink my wool napper theory, since I caught another cat blatantly attacking the wool. No subtlety or subterfuge here, she strutted over and went crazy - Siamese-style - on me. 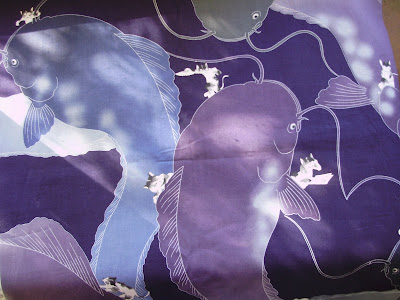 I bought this fabric today for a future quilt. This is for the back - they are giant koi and tiny kitties doing various things like reading newspapers and making shopping lists. I think one of them is smoking. Those wacky Japanese :-) It even drew comment from the gruff fabric shop man. I think he liked it more when I pointed out the kitties to him. For $8 a metre, it's a bargain. 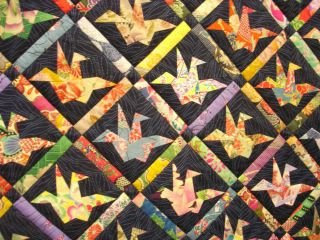 I'm going to make the Peace quilt by Margaret Rolfe. It's foundation pieced. Think I might do this on interfacing, instead of paper, so I don't have to pull all the papers out. I want to get a purple/grey background instead of the navy blue so it tones in with the backing a little. I bought a set of 50 charm squares to start the Japanese fabric off. I don't have many Japanese fabrics - I like them, but they are kind of hard to use with anything but Japanese fabrics. This was a "talked me into it" project. My friend likes for me to make the same quilt as she is, and she wanted to use Japanese fabrics. I'd seen this quilt a while ago, so cranes it is. Lots of little blocks, though. I'll probably say some bad words before this is finished.

Today is Quilt Judging Day for the RNA show. They haven't called to tell me I've won yet. Last time I won a prize they called me at 9.00 pm to tell me, so there is still time for them yet.

Or, if worst comes to worst, I will have to pay to get into the Ekka (they give you free tix if you win a prize). My son is more excited about the possibility of free tix than of me winning a prize.


Edited to add: I won Best Use of Colour! Free Ekka tickets are on their way!